Get your hands on the geek desk before anyone else as well as other insider information by signing up to become an Arran White Stag member.

"Blessed are the geeks, for they shall inherit the earth."

That’s the saying isn’t it? We geeks are no stranger to a distillery tour, but the scanning-eye of even the most scrupulous anoraks among us (don’t worry, I count myself as being very much amidst your ranks) will occasionally be met with the sight of nondescript metal boxes below raised floors or round the sides of distillery buildings and our curious nature will prompt us to wonder, “what is it and what does it do and why is it needed?”. In most distilleries, these days, the requirement for modernisation in certain places has necessitated the installation of extra components. A while back I wrote a blog for the website which looked briefly at some of the elements of modernisation here at Lochanza. The main part of the upgrade concerned the addition of two more stills. Contrary to popular belief, this wasn’t purely to allow upped production of new make spirit; it also allowed us to be more flexible with production schedules. Less time spent making the same amount of, or slightly more, spirit. Of course, there were implications; one of them being the addition of one of the afore-mentioned, slightly nondescript silver boxes - a cooling tower. 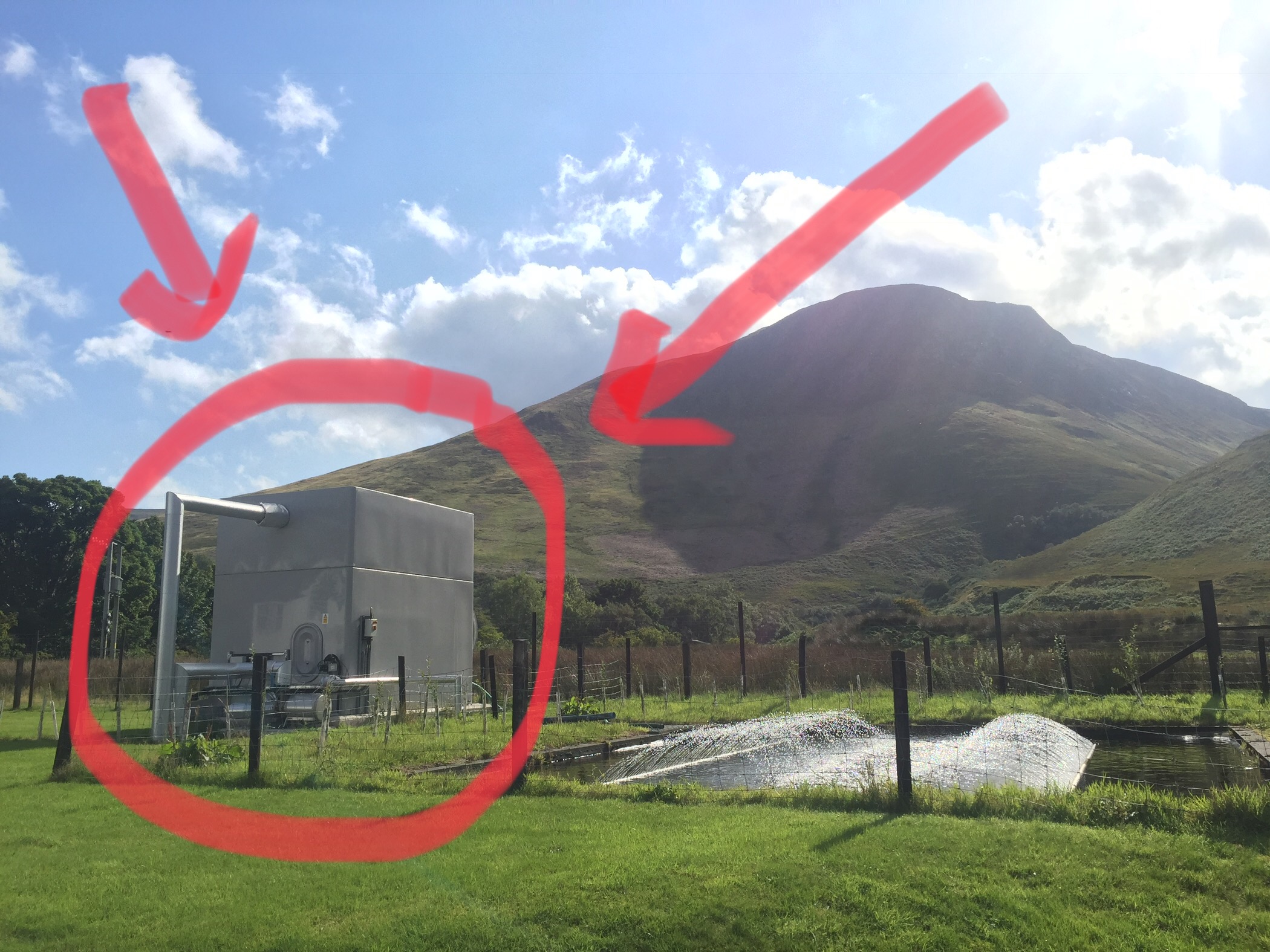 Thar she blows! I bet not all of you know the ins and outs of these systems. Well, ‘ins and outs’ are exactly how they work, so let’s delve in and have a look under the bonnet of the cooling tower and associated “gubbins”. 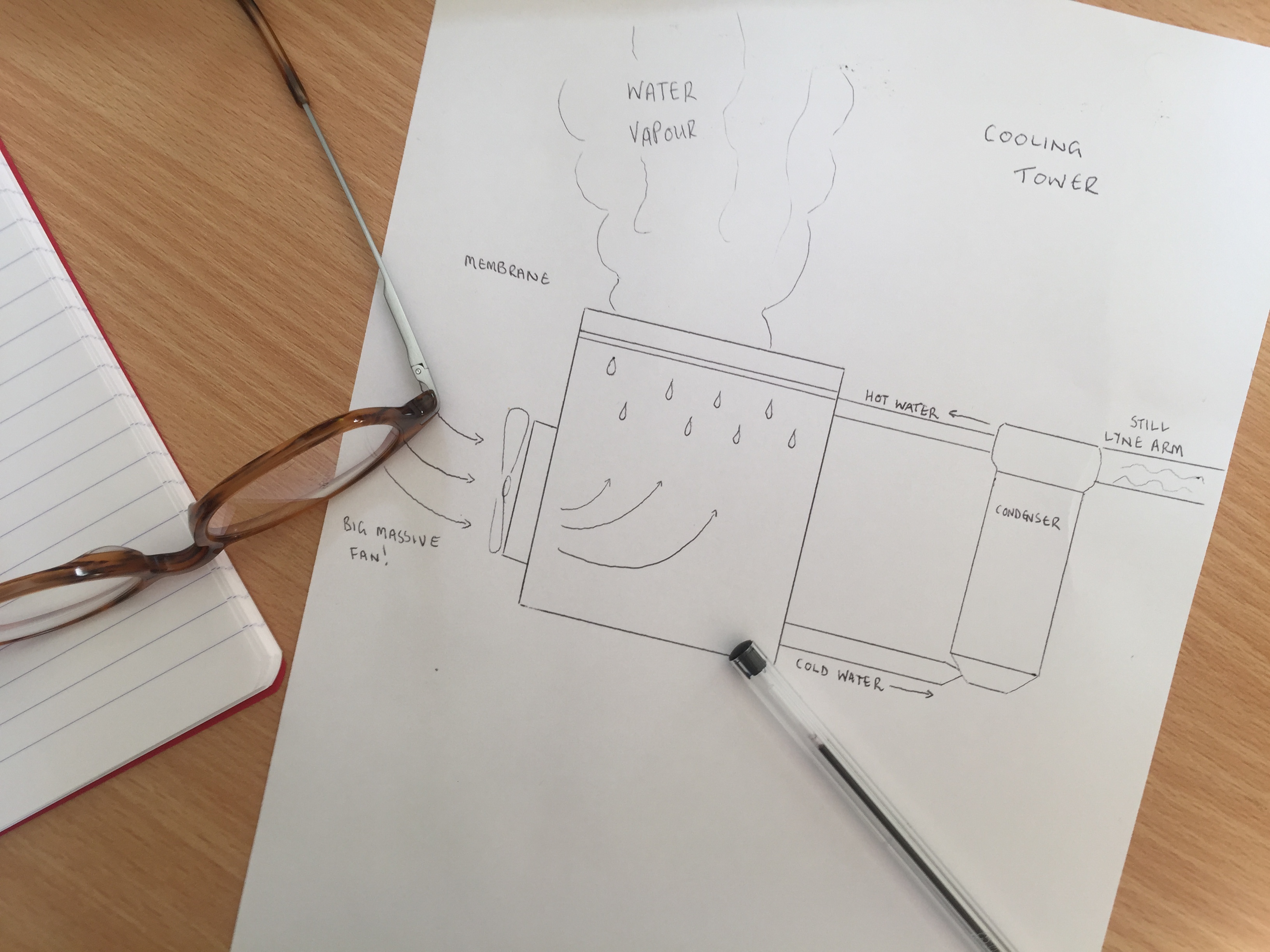 You know this already. The condenser is the piece of equipment which changes vapour back to alcoholic liquid – spirit – in the distillation process. The vapours come into contact with cold water-filled pipes and condense into liquid. The condenser’s pipes are filled with cool water from the bottom up, when the water at the top contacts with the hot vapour travelling along the lyne arm, a heat exchange takes place. Heat is pulled from the condensing vapour and transferred into the water, creating hot water.

The hot water created by the condenser is extracted towards the cooling tower at a temperature of around 35 degrees. It runs onto a special membrane at the top of the cooling tower system which creates very fine droplets of water.

This does what big massive fans do best, generates a lot of air flow! It brings air from the atmosphere into the body of the cooler where it blasts through the tiny droplets created by the membrane. Heat is forced out of the falling water which then gathers at the bottom; cooled to a more useful 14 degrees. The only by-product of this is water vapour which is vented to atmosphere. Similar technology is what creates the plumes of white cloud which emanate from nuclear power plants.

This pushes water back towards the condensers which use the system and the cycle starts all over again. Of course the level in the tower slowly drops as vapour is driven off, so the whole thing can be topped up via mains as required. At Lochranza, condensers number one to three (of four) take water from the cooling tower system.

So why did we need to add a cooling tower? The reasons are mainly surrounding compliance with environmental obligations concerning water drawn and returned to the river from which we have a license to “borrow” 32,000L/hour. In our old two-still system, the water was used for mashing as well as all condensers and other processes. After use in the condensers we’d cool it down in our pond then return it to the river at below 30 degrees Celsius. The addition of two more condensers would have taken our potential draw and return requirements beyond the thresholds. All production water is still taken from Loch Na Davie via the Easan Biorach burn.

Lochranza is very much a distillery of traditional heart, so some parts of the process must be absolutely steadfast; the mashing water is one of these parameters. If we wish to stick to using Loch na Davie as the key ingredient in our single malt whilst goal-posts change in other areas then careful, clever modernisation is necessary. Done sensitively, this does not have to spell disaster for the look, feel and most importantly product of our beloved distillery. Our master distiller, James Mactaggart, is unique in his ability to balance 40+ years of experience in traditional production with the realities of the modern whisky industry. Those who have been to Lochranza confirm his success in this when they attest that absolutely none of the magic is lost...

Where we stand at Lagg