The little distillery at Lochranza has undergone something of a rebirth recently.

Since construction in 1995 the distillery had two stills and a production capacity of 750,000L. In recent years recognition and demand for The Arran Malt has continued to grow, hence production output had been creeping ever closer to that figure. The installation of two additional washbacks in 2014 meant that the stills could be run more frequently and as such produce more spirit than ever before. Throughout history the most successful whisky companies have been those which have laid down enough stock to provide plenty of aged whisky in boom times, yet not held so much stock that it causes cash flow problems in times of lull (i.e. the whisky loch of the 1980’s!). The decision was taken in 2015 to upgrade the Lochranza distillery from a two still, to a four still operation and in the early days of February 2017, the new configuration was fired up for the first time.

Of course, it’s not as simple as adding a couple of stills and making sure you have enough wash to charge them. The implications of a large scale upgrade like this are wide reaching. There's the actual cost of the new copper stills, the down time from production whilst they are installed and commissioned, the requisite still house ‘feng-shui’, the teething problems in the weeks after installation is complete.  Not to mention the new and additional apparatus and paraphernalia required to support the upped production plus necessary amendments to existing plant which are all not to be underestimated. And most imporantly there is the learning curve for the production team in adapting to using the new equipment from the get-go. 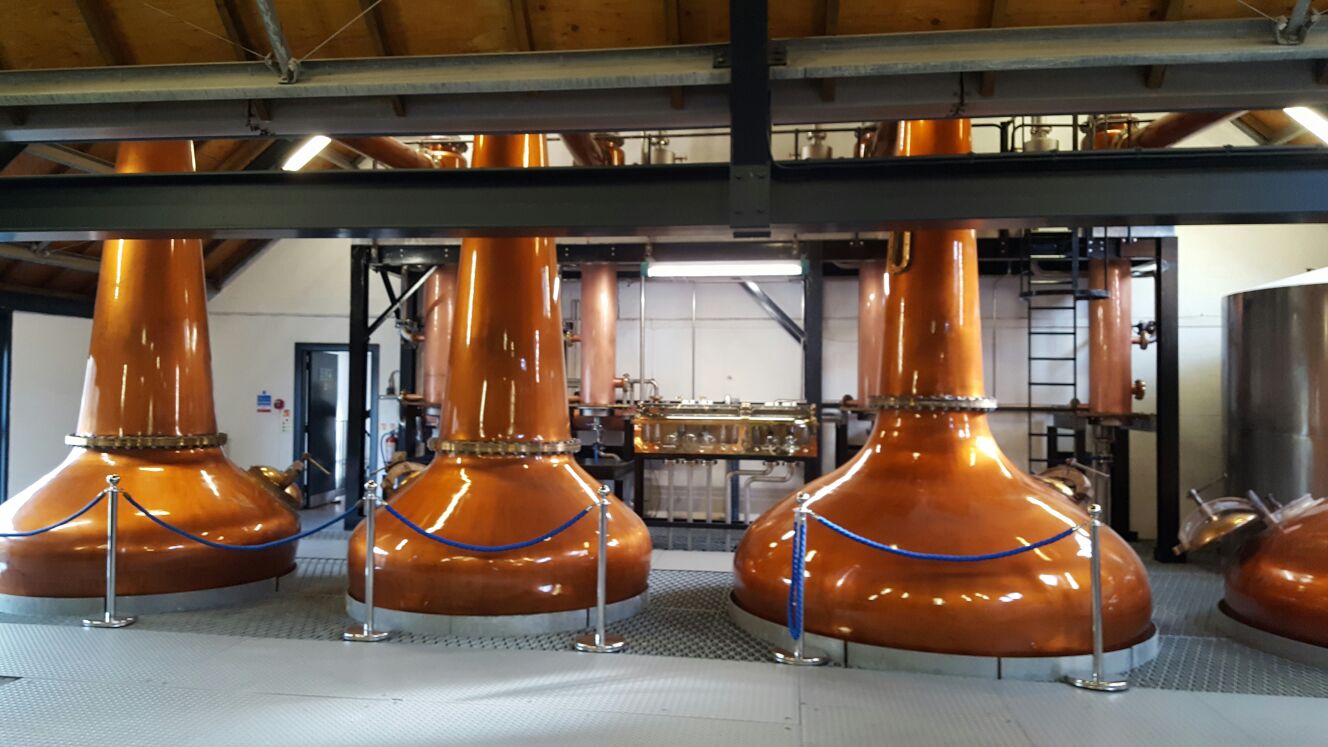 In today’s somewhat cask-centric whisky industry, where woody-words (which arguably have nothing to do with spirit character) like “spice” and “tannin” are often used to describe a dram’s flavour, it’s easily forgotten that any distillery’s house-style and character should, at heart, be its spirit quality.  This is something that Arran has always strived for. We have long been known for our tropical, fruity, oily, high quality new make spirit whose flavours make it all the way to the bottle in our most popular core expressions, so it was imperative that we maintain consistency even after four new stills were installed. To this end four exact replicas from the original still design drawings were ordered. The manufacturer of our original stills, Forsyth’s of Rothes, were brought back in to facilitate the installation. Production operators are, largely, past the point of putting dents and bashes into new stills to mirror their predecessors but it is still of utmost importance that the new ones were the same shape as the old to ensure our character remains consistent. The old, thinning stills were removed – one placed in the distillery grounds as a nod to the past, the other placed in storage for another day… 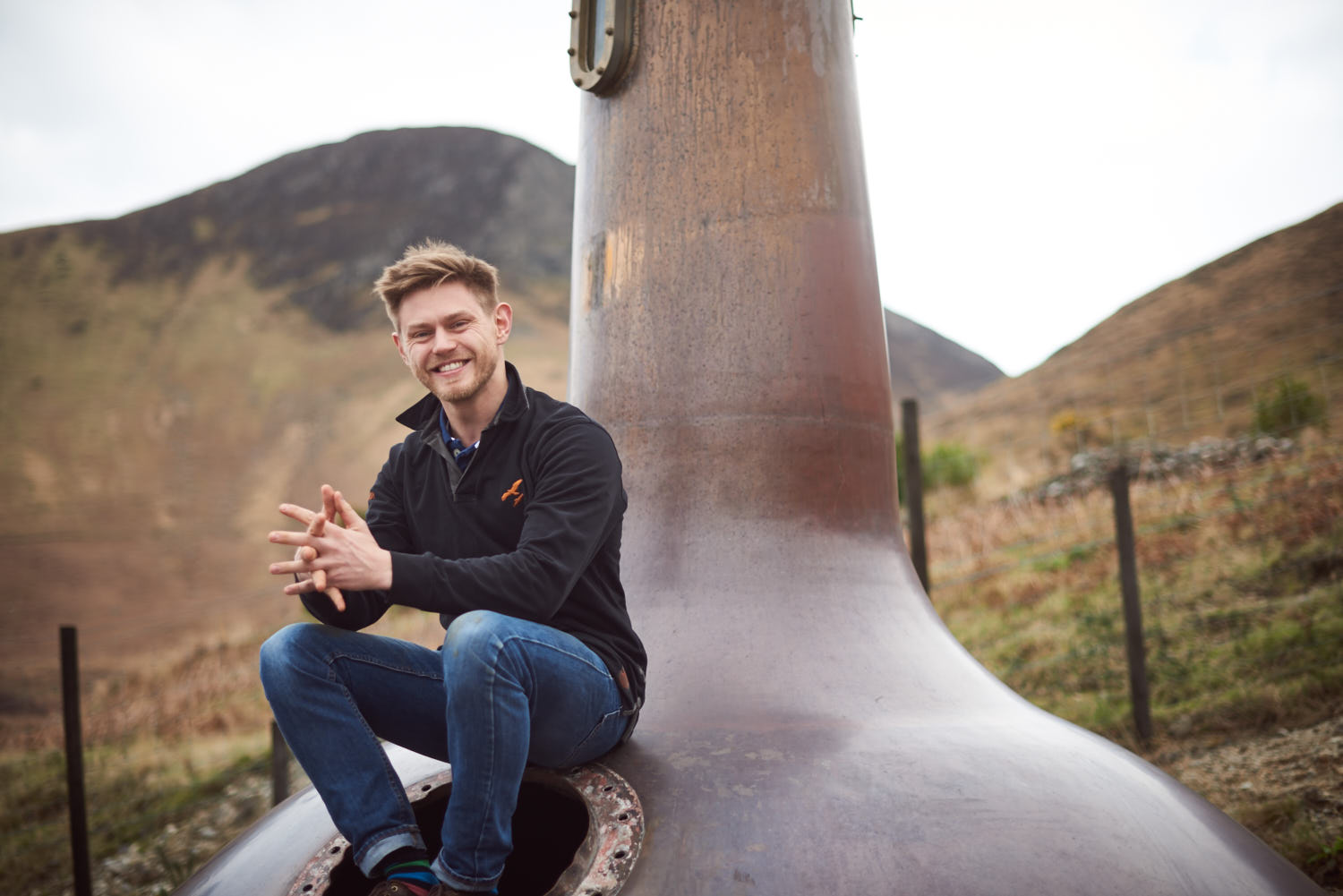 There were many upgrades across the whole distillery to support the new stills and upped capacity. A more efficient heat exchanger post-mash tun, supported by a mash filter to help ensure that we retain our fought-for clear worts aiding good fermentation. Our Oregon pine washbacks remain the same, but the pipework feeding them with 20 degrees-warm worts has been increased in diameter to allow more efficient flow and charging of the vessels. Clever re-use of condenser produced heat means that wash and worts charged to the stills is pre-heated to aid a quick boil and improve efficiency. The production capacity of the distillery is now over 1.2 million litres of spirit per year. At Lochranza the ‘mash house’, fermentation and still house are all in the same room, more equipment means that it’s a hotter, noisier place than before. Admittedly some parts of the distillery are a little shinier than they were before; but we still mash all Scottish barley, ferment in wooden vessels, distil twice, manually read hydrometers and judge spirit cuts by eye and nose, fill at 63.5%abv and store all of our casks on the island – a production process which is still very hands-on indeed. The aches in my shoulder from carrying 30kg bags of yeast and in my lower back from aligning newly filled bourbon barrels by hand pay testament to that. Standing in the filling store at 22:30 as I reduced the spirit for the next morning’s filling of 110 bourbon barrels just as still man Graham transferred over the last 750L of new spirit it was clear to me that this remains entirely a people driven process. 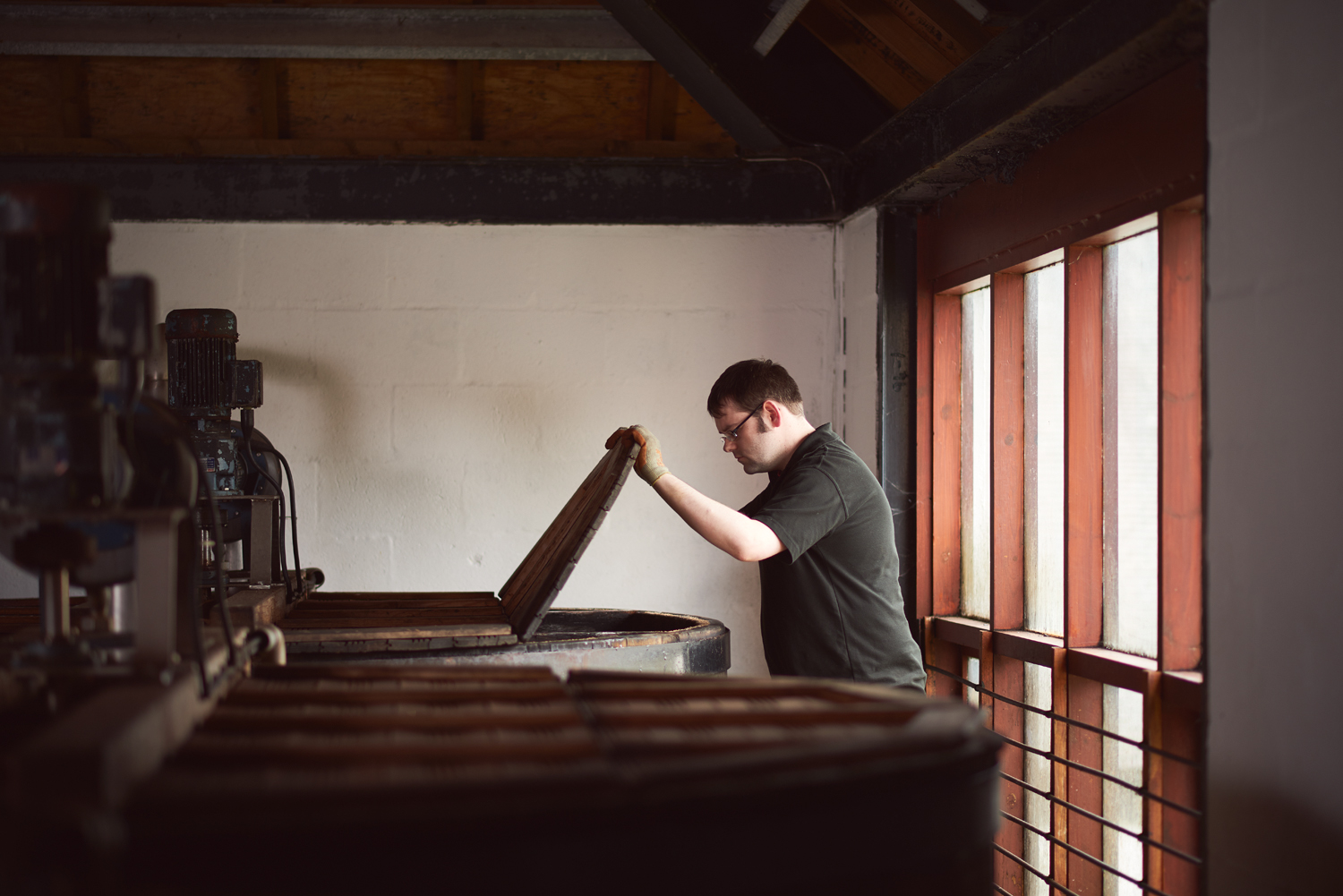 It had been over three years since I had been at the distillery purely with a view to getting involved with production. Before the visit I wondered if the new stills and associated upgrades would have diminished Lochranza distillery’s artisanal feel. With tongue firmly planted in cheek, it’s been said that at large scale modern distilleries human interaction with the process is minimised with only two employees required - one man and one dog. The only one of them with a job to do is the dog – to bite the man if he touches any of the controls. In the still house at Arran, the product is no less hand crafted than before. Yes there is some new valve technology in place, a new pump or two and some efficiency improvements but manual operation of the mill for the right quantities and grade of grist, water heat, worts and wash transfer, yeast pitching, gravity checks, distillation, cask filling and storage, vatting and blending – all aspects of production are still done by hand, back, legs, arms, nose, ears and mouth. The Arran Malt way has always been to move with the times, but stay true to our island’s traditional whisky making roots. We honour tradition but don’t rely on it. We respect the past but don’t live in it.

Top Tips For Hosting Your Own Whisky Tasting