Get your hands on the geek desk before anyone else as well as other insider info  by signing up as An Arran White Stag HERE!

Hello Arran Whisky Fans! Starting from today I’ll be making a semi regular post with a view to giving you all a bit of behind the scenes insight to the production process and some of our products. Sometimes they’ll be short, sometimes a bit more involved. I’ll be covering things that I personally find interesting, hopefully they’ll be entertaining for you to read.

Barley! Why do we use it? Why not corn or wheat or tatties or apples? Whisky production has been going on for hundreds of years, but even back in 1494 Friar John Cor was instructed to buy “8 bolls of molt for the production of aquaviate”. Everything in this sentence (the unit of weight measurement, and the name of the end product!) has changed except, beyond the spelling, the key ingredient. Malted barley. Whether or not it was known back then, barley simply has (always had) the right combination of physical attributes, process-ability, enzyme content and flavour potential to be the “Rolls-Royce” of spirit-producing grains.

Barley is amazing; all the processes that go on inside every single barley grain on a molecular level make whisky production possible.

Key to the whole discussion, and the unsung heroes of the whole thing, are the enzymes present in the barley; these are proteins which make the barley’s starch available and convert it to fermentable sugar. In the production of Scotch whisky the law does not permit the addition of additional enzymes – this is not true of Irish whiskey or grain distilling outside of Scotland. In single malt production we have to make do with the barley’s own internal or “endogenous” enzymes - fortunately these are more than capable of converting the long chain starches to sugars which yeast can consume. A closer look at that topic is for another day.

At Lochranza the prevalant strain is use is Concerto. We mash 2.5tonnes of this 14 times per week. It’s performing well at the moment, giving us a PSY (predicted spirit yield) of 420 L of alcohol per tonne. 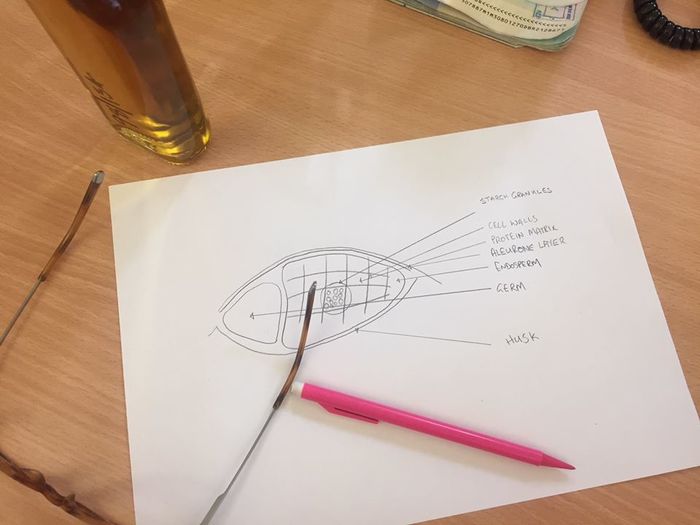 Germ - Source of the root and shoot for a new barley plant. This is also the starting point for the chemical chain reaction which is of use to us in the malting process. When the barley is steeped to raise the water content to 45% then laid on a warm malting floor the magic begins to happen. Gibberillic acid is released by the embryo which causes the Aleurone Layer to wake up and get to work! The germ and embryo would be the start of a new plant, if we didn’t interfere! Muahahahah!

Aleurone Layer - The enzyme creation power-house of the barley grain. In response to the embryo’s Gibberillic acid, beta-glucan, alpha and beta amylase (required in mashing), and other enzymes are secreted into the endosperm which is the main body of the barley grain. Alpha and Beta amylase are a post all of their own for another day!

Endosperm - The main body of the barley grain, this contains the grain’s “food” reserve which, in nature, would sustain the initial growth of a new barley plant.

Cell Walls - These are gum/sugar/protein walls surrounding the precious starch granules held up in protein matrix. They are broken down by the aleurone-layer released enzymes to expose the granules to enzymes for conversion. Broadly speaking; the more granules, the thinner the cell walls the better. These attributes are manipulated by modern barley breeders to maximise potential for distillers.

Protein Matrix - The ‘glue’ which suspends the starch granules. It too is broken down by aleurone-layer produced enzymes. The best analogy here is Toblerone – where the chocolate is the protein matrix and the nutty bits are the starch granules. If you sucked a piece of Toblerone, your mouth (the enzymes) would heat the chocolate (protein matrix), which would melt (break down), exposing the nutty bits (starch granules). All this break-down is the production of the “food” that the baby barley plant would need to grow itself above ground before beginning photosynthesis then going to university, getting a job, earning a wage and raising a barley family of its own.

Husk - A very important part of the barley plant to a distiller. Not chemically exciting, but is of the utmost importance in helping us to attain good drainage through our mash-tun. Pairing the husk with a properly set mill can be the difference in a successful mash with high extraction or making yourself 15,000 litres of porridge. Yum.

From harvest to mashing, even something as physically small as the barley grain is a hive of activity. Lochranza is a relatively small distillery and given that we use 2.5 tonnes of barley every mash (of which there are 14 per week) and that one barley grain weighs about 0.065g, the amount of chemical reaction and activity that takes place inside every grain is simply mind-blowing. Best not to think too hard about it… I think it’s time for a dram of 10 year old!

White Stag Fourth Release - What you need to know!