White Stags over the years!

Our White Stag bottlings are something special for fans of Arran Single Malt, as the liquid is chosen by our community members, for the enjoyment of the rest of our community. With the release of our 5th edition this week, we take a look back at the first five editions.

We released our first ever White Stag Community Bottling in June 2015.  10 members of our White Stag Community entered a competition to be part of the 2015 Tasting Panel and met in Glasgow in January 2015 to attend a tasting evening. The panel had to select one cask from 5 cask samples, and together they chose cask number 1997/737 which eventually produced 214 bottles for sale to the community. It was a tremendous evening and we made many friendships which have grown over these past few years.

The panel then followed the process of bringing the cask from barrel to bottle and produced a group tasting note which was printed on the final packaging, along with each of their names. This was the start of an annual opporunity to get up close and personally involved with an official Arran Distillery bottling. Since that first bottling, the community has grown immensely, and there are fewer and fewer of the precious First Edition in circulation these days.  We like to hope that most of them have been opened and enjoyed, but we so spot that a few sometimes turn up on auction sites.  White Stag Andrew Smith was part of the first ever tasting panel and said:

I feel immensly priviledge to have been part of the cask selection panels for the festival bottlings the last few years and an absolute highlight was participating in the White Stag Tasting Panel to pick the cask for the first White Stag bottling.  The Arran staff have always been so welcoming and helpful, I don't know another distillery like it.

Our second community bottling was chosen by the White Stag Tasting Panel of 2016.  We took a different approach for the second edition of the bottling, by inviting friends from far and wide to take part. The second Tasting Panel was formed in May 2016 after over 200 of our White Stags applied to take part.  We chose 22 White Stags from all over the world and each received a bespoke tasting pack via courier to their home, and they were tasked to select their favourite of the 3.  Cask 96/1335 was duly selected, a Single Sherry Butt from 1996 which was bottled at a cask strength of 49.5% abv and produced 525 bottles for the worldwide community.

You can read a write up of Karel-Jan Senave's experience of being on the tasting panel and also Klaus Doblemann's write up of his notes on each of the whiskies that featured in the 2016 panel.

The White Stag Third Release was selected by the 2017 tasting panel and a record number of over 600 people applied to take part in this panel. Out of the samples selected for tasting by James in 2017, a 21 year old marriage of two Sherry Hogsheads was chosen and bottled at a cask strength of 52.5% abv. There were 695 bottles available for our worldwide community, chosen by 20 of our White Stags in our worldwide online community. This was a stunning bottling which remains a firm favourite now. 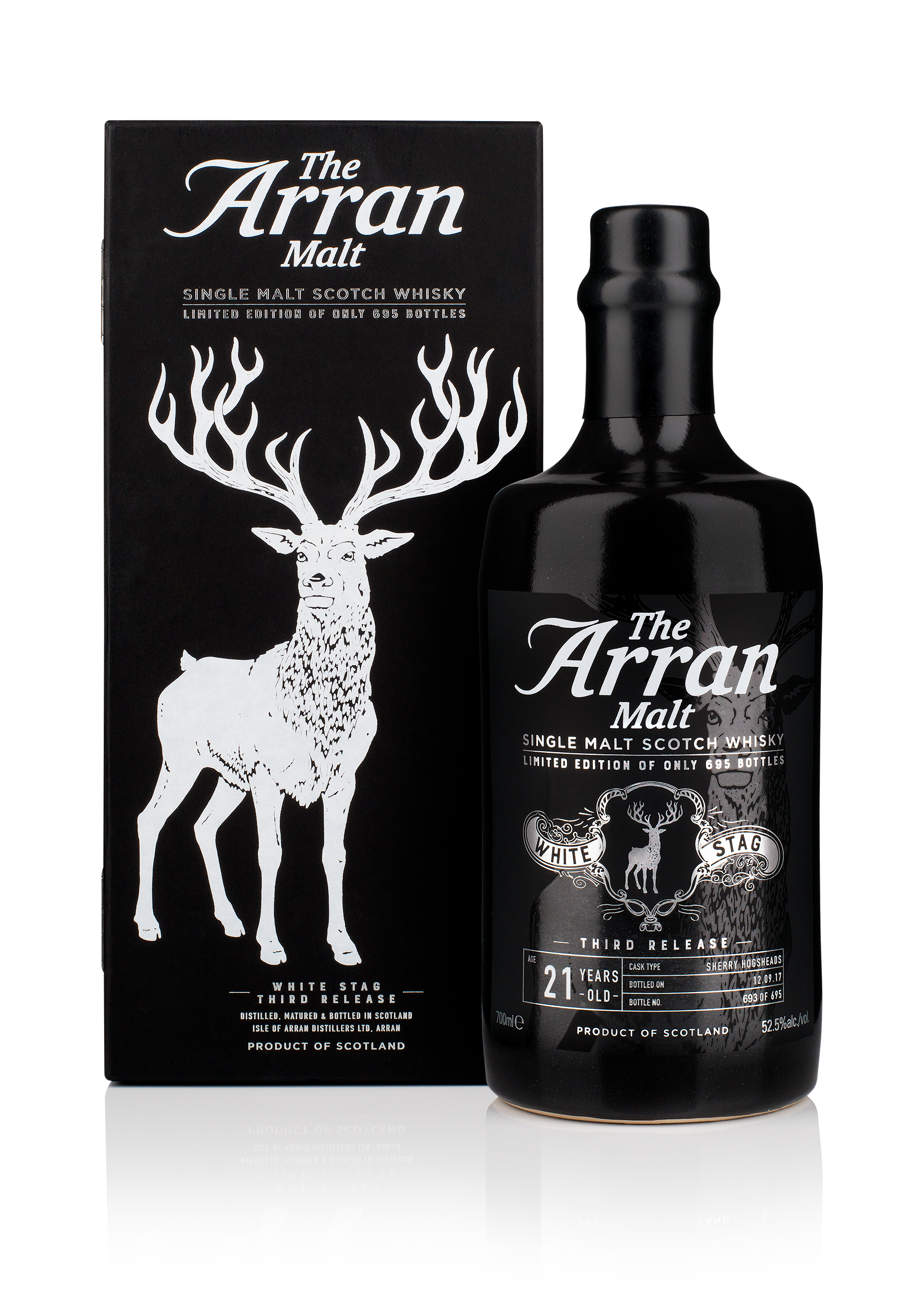 The White Stag Fourth Release was selected by a panel of 22 members of our White Stag community who all received a sample pack with three very different whiskies included in the mix.  This year, the panel were thrown a curve ball and had to select between a much older cask marriage, a younger one and indeed a peated sample!  The final sample chosen was a marriage of four un-peated Bourbon Barrels from 2008 - a 10 year-old Single Malt. This vatting was heartily approved by our Distillery Manager as he has always favoured the Bourbon Barrel for younger expressions of Arran.  There were 875 bottles available worldwide.

The White Stag Fifth Release was another excellent selection by our 2019 tasting panel which had members tasting from all over the world, even as far as Japan! The final sample chosen by the panel was once again the youngest of the three samples provided for tasting - a marriage of four Sherry Hogsheads distilled on 1st December 2009 - at the time of release a 9 year-old Single Malt. The style of this whisky was a return to the early styles of Arran Single Malt which were mostly matured in Sherry Hogsheads, and the panel recognised this and enjoyed the delicate citrus notes and sense of nostalgia that it evokes. There are 915 bottles available worldwide. This is a particularly special one for us, as it's the last one presented in the beautiful iconic black box which started the series off.

The White Stag bottlings have been such a pleasure to be part of with our community of White Stags over the years.  We have learned a lot, met lots of new friends and built up a brilliant community of like-minded Arran Whisky friends.  We have managed to meet many of you in person either in Lochranza or when we have visited the countries you all live in.  It has been an amazing few years, and this year you have followed some of our greatest adventures to date as we opened our second distillery at Lagg, and packaged our much-loved Arran Single Malts in some new whisky clothing!

We are excited to see where the White Stag bottling will go next year, as we enter the year of our 25th anniversary.  It's likely that the community bottling will have some new whisky clothing of its own to bring it up to date with our new logos and pack.  We hope that you will enjoy being with us in 2020 in the next part of our adventures, as Isle of Arran Distillers turn 25 years old!

If you haven't joined the White Stag Community yet, why now do it now and JOIN US HERE!