Process up to Fermentation...

It’s no secret that Isle of Arran Distillers are writing the opening pages of a new chapter in the company’s history. With our new distillery at Lagg in the south end of the island we have a few key aims. To bring whisky production on Arran back to its spiritual home, the agricultural south end of the island; to produce a heavily peated single malt redolent of typical “island style” and to take the opportunity to implement production processes that differ from our flagship distillery at Lochranza. At the moment, it seems that the discussion on smoky whisky ends at “what PPM is it?”. There is so much more to the subject and we intend to investigate!

Let’s leave the historical first aim for another day; here at the Geek Desk we are liquid researchers, detectives of distillate, academics of…aldehydes?! Never mind! Let’s just take a look at the other two of our aims – Lagg’s heavily peated spirit style and variations in production process.

At Lochranza our spirit style is essentially light and fruity with oily mouthfeel. Yes, we run peated malt occasionally at 20ppm and 50ppm ratings but we have never wanted (nor, truly been able) to produce the tarry, medicinal spirit style which a lot of people would presume goes hand in hand with high peating levels. Let’s debunk a myth – “the higher the PPM the smokier the taste”. In fact, there are multiple factors which sculpt a whisky’s flavour and in turn influence your perception, including how smoky the dram might taste. To what level was the barley pleated? Was the mash raked? How long was the fermentation? What’s the washback made from? Which yeast strain? What size are the stills? How fast are they run? What were the distillation cut points? What type of cask was the spirit matured in? How old was the whisky when it was bottled? Settings on the sliding scale of all these metrics (and more) will determine how much of a smoky assault is inflicted on your nostrils when you stick your schnozzle in the nozzle of a Glencairn filled with a peaty dram.

Our new distillery at Lagg in the south end of the island has been constructed with a view to bringing whisky production back to the area for the first time in over 180 years. If the whisky we make at Lagg is to bear any resemblance to the Arran waters of yester-year it will have to be smoky, meaty and full bodied meaning we are going to have to do things a little differently from Lochranza. Hence, Lagg distillery has been designed, ground up, with this in mind. Thankfully, with a master distiller native to Islay, at Arran Distillers affinity to smoky whisky runs deeper than a peat bog. Let’s look at some of the factors we are keeping in mind as we close in on what will be the final “recipe” for making spirit at Lagg.

As well as a good portion of local barley (grown in the field behind the new distillery) being sent for malting to 50ppm, we will be using exclusively peated malt. This is the obvious starting point for making smoky whisky. Peat will initially come from the Tomintoul area, but experimentation in this regard is very much on the agenda at Lagg…

Mash Tun (and a bit of fermentation…)

At Lagg the mash tun is around double the size of Lochranza and the mash will be raked. Lochranza’s clear, bright worts from almost entirely un-raked mash ensure ‘optimum’ yeast performance at fermentation and pass no solids to the washbacks. Conversely Lagg’s raked mash passes cloudy worts to fermentation which are thick with additional non-fermentable compounds which, in turn, slow the yeast’s progress and curtail an element of the fruitiness in the wash. This eventually translates to spirit with more spotlight on nutty, earthy characters. Sure, fermentation may technically be less efficient, but we are more than willing to sacrifice a little yield in pursuit of our desired character.

At Lagg this happens, as at Lochranza, in large format wooden washbacks. We’re pretty good at hospitality on Arran, so any local wildlife in the air and that will build up in these over time is more than welcome to stay, rent free, at the Lagg Distillery. Fermentation is also long. Our M strain distillers yeast is proven to be ideally suited to the production of wash from peated malt and takes about 55-60 hours to ferment out. All four cycles of the yeast’s life (a future GD, anyone?!) take place then the fermented wash stands for a further period in yet another pine receiver before being distilled. This extra period allows further development in flavour, over and above washback fermentation. 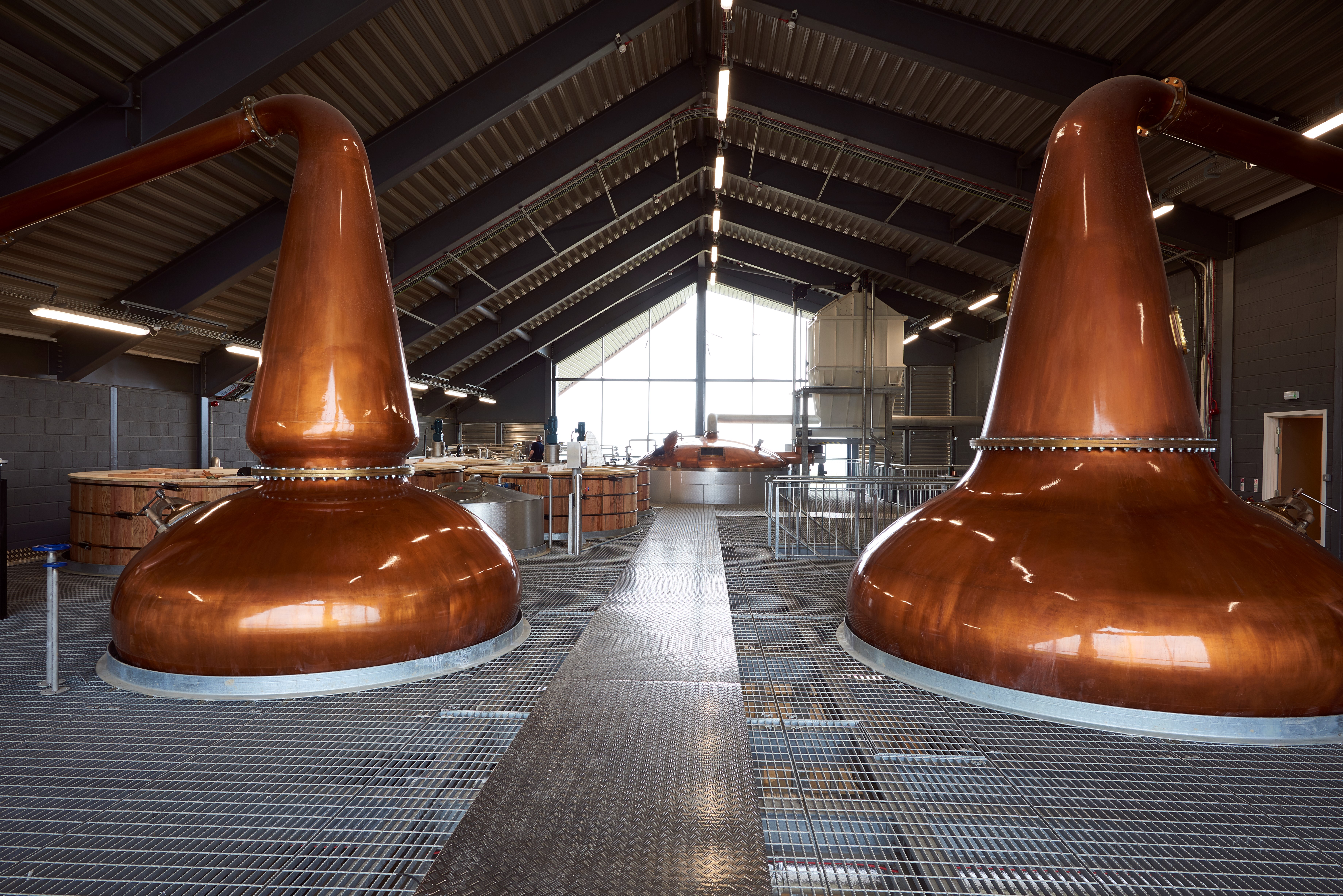 A Breath of Fresh Arran